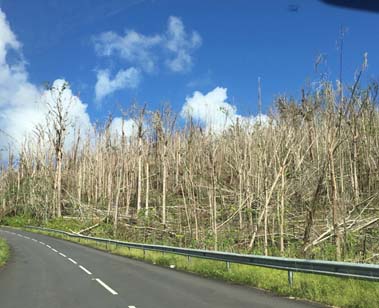 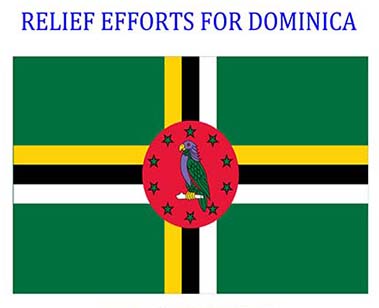 OMAT GETS RELIEF HELP FOR DOMINICA
A month after disastrous Hurricane Maria hit the island of Dominica, I arrived by ferry to find massive cleanup efforts underway in the capital city of Roseau. My deep fears of not being able to deal with the devastation had been alleviated. But what I saw was shocking!

As I drove along the coast of the island, I was left speechless. The force of the storm had beheaded trees. Stripped of their bark, they appeared like matchsticks standing at attention on the mountainsides. The island’s greenery and delightful foliage along the northeastern coast was all gone! Tall palm and coconut trees, lush banana plantations, huge ferns, and colorful heliconias were all gone! The ravages of the storm were not caused by the raging sea but by wind and the rivers.

A ride along the southwestern coast displayed the rivers’ havoc. Dominica, Nature Island of the Caribbean, boasts having 365 rivers. These rivers, swollen with the rains from Maria, widened their reach and brought with them stones, mud, tree limbs, and other debris from the mountains into residential areas destroying houses and their contents. Villages from Portsmouth to Point Michel displayed the rivers’ devastation. The rivers had formed new waterways.

At the time there was not enough equipment, labor force or resources to meet the great demand for relocation and cleanup efforts. Volunteer help from neighboring islands was visible.
A meeting with the Adventist Development and Relief Agency (ADRA) representative in Dominica, Nurse Pricilla Prevost, expressed the urgency for rebuilding schools and churches to bring hope and normalcy back to the lives of dazed and traumatized Dominicans. ADRA was at the forefront of rebuilding homes for locals after Tropical Storm Erica hit Dominica in August of 2015.

HELP IS ON THE WAY…
Fundraising efforts had already begun at our local church, joining forces with Dominica

Association of Seventh-day Adventists in US (DASUS) and on the OMAT website. The response was favorable, but we needed more help.
The Northeastern Conference of Seventh-day Adventists was quick to respond to a plea for help from the OMAT to its president, Dr. Daniel Honore. The Women’s Ministry Department took an offering at their bi-annual retreat and donated the proceeds to the OMAT. But what was remarkable was the quick response of the Community Service Department, headed by Pastor Fitzgerald Kerr. Within a week of the request Pastor Kerr announced a date for a mission trip to help rebuild churches and homes. A 17-member team began plans for this mission at no cost to the OMAT. Members paid their way, shipped supplies, and went on a mission of service to Dominica. Nurse Prevost reports that the team did a remarkable job in Point Michel, one of the hardest hit areas, and in Egleston.
OMAT sincerely thanks all its contributors for their efforts to help Dominica. A donation of $10,000 will go to help rebuild a Primary school, which will be relocated from near the Roseau River to Goodwill. A pledge $10,000 to the Colihaut School after Tropical Storm Erica will also be met.
Another mission is tentatively scheduled for the month of February to continue with roof repairs.

BUT THERE IS HOPE…

One of the obvious difficulties that occurred as a result of Hurricane Maria was a shortage of local fruits and vegetables. The market was non-existent, but venders found themselves situated all over town with ground provisions and ginger. Those were not in short supply. Anything growing above ground was in great demand and scarce. Stores were not at full stock but there were enough supplies available.

To date the rains have not stopped. The roofs are still covered with tarpaulins as homeowners settle their insurance claims or gather their limited resources to repair their properties. A glimmer of hope arises as the heavy rains stir the roots of trees, shrubs, and grass. It is beginning to be green again!! Fertile soil will bring new harvest and Dominica, Isle of beauty, Isle of splendor, will recover!
There is HOPE!!